If you want to get rid of coughing its
Natural Remedy is Thymusan!

Upper respiratory tract infections, known as common cold colloquially and which are caused by viruses, are among the most common infectious diseases both in the world and in our country. it can be observed 3 - 8 times a year in children while it can be seen 1-3 times a year in adults .

Its symptoms generally comprise chills, cough, sore throat, runny nose, nasal congestion, sputum, headache, and fever. More than 200 viruses have been identified to cause common cold. Generally bacteria also accompany this situation and cause the aggravation of complaints.

The fact that more time is spent in indoor places in cold weather also increases the risk of URTI contamination. Furthermore, cold air causes the drying of the inner tissue of the nose and eliminates the natural protective mechanism. If the immune system is not working properly and supports enhancing body resistance are not taken enough, the disease becomes more severe and triggers other disorders.

Coughing is one of the most frequently occurring complaints during respiratory tract infections.

Coughing, as a matter of fact, is a part of our defense system while it is also a complex mechanism to eliminate foreign substances from airways . Any foreign matter causing airway irritation or a microorganism leading to infection may be the reason of coughs.

Development of cough resulting from upper respiratory tract infections 7-8 times a year is considered to be normal particularly in school-age children.

In the common cold, if the running nose fluid goes back to the trachea during sleeping at night it causes irritation in the trachea, which can lead to severe night coughs most of the times. Cough syrups, which are generally used in this case, are sometimes not preferred by most experts inasmuch as they can veal serious diseases and cause various side effects.

At this stage the solution comes again from nature...

Thymusan Syrup offers a natural solution by containing a balanced formulation of Thymus Vulgaris (thyme), Zingiber Officinale (ginger), Curcuma Longa (turmeric), Salvia Officinalis (Sage) and Pine Honey, which have been used for centuries in treatment of colds and coughs in traditional medicine. 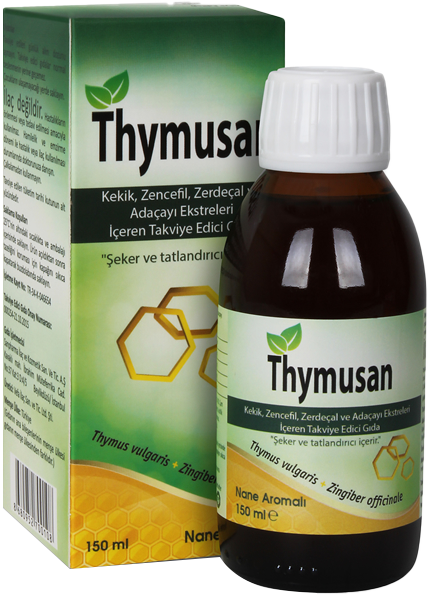